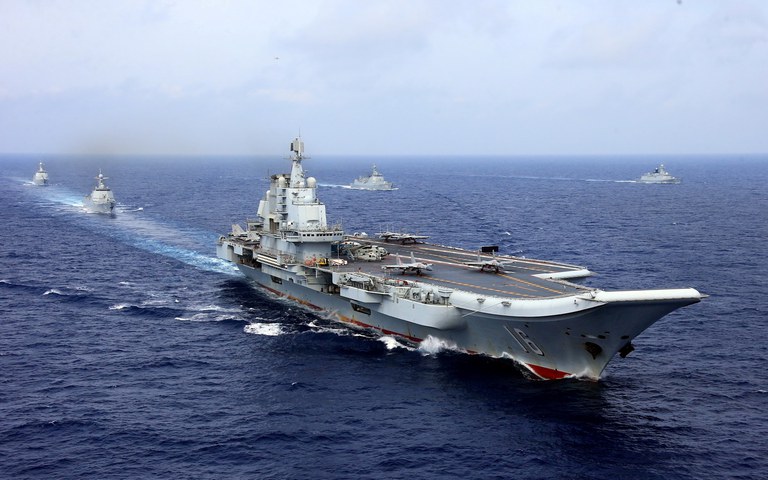 A six-minute video, produced by the PLA Navy Political Publicity Bureau and the army broadcaster, was posted on Friday. It provides a glimpse into China’s aircraft carrier program and how the PLA carriers and personnel operate.

China already has two aircraft carriers in operation, named Liaoning and Shandong. The third is being built and the promotional video seems to give a hint that its launch is imminent.

At the end of the video, timed for China’s Navy Day which falls on Saturday, an officer is shown taking a call from his mother who appears to urge him to have “the third child,” to which the man replies: “That’s being arranged.”

The camera then moves to two photos of a carrier’s flight deck – an apparent reference to the first two aircraft carriers – before shifting to a blank screen and closing credits.

This bizarre hint nevertheless got some Chinese media excited. The state-run tabloid Global Times wrote: “This is a very clear implication that the country’s third aircraft carrier is coming soon.”

The Global Times quoted Song Zhongping, a Chinese military expert and TV commentator, as saying that the third carrier, known as Type 003, could be launched “in the second half of 2022.”

The paper said the carrier may be named Jiangsu, after the province in eastern China.

“From the video, it does seem that the third Chinese carrier would be launched in the near future,” said Sheu Jyh-Shyang, a military expert at the Taiwan’s Institute for National Defence and Security Research (INDSR).

The U.S. think tank Center for Strategic and International Studies said in a report last November that the launch “could be as soon as February 2022” but it has been delayed several times as China is struggling with the Covid pandemic.

Recently severe lockdown measures have been imposed in Shanghai, home of the Jiangnan Shipyard where the Type 003 is being constructed – and where the Covid situation has disrupted shipping and may have caused delays in arrival of components for the vessel.

Compared to the first two carriers, the Type 003 appears to be larger, and it has some new important components including catapult systems, used for launching aircraft from the ship.

“It is the first CATOBAR (Catapult Assisted Take-Off Barrier Arrested Recovery) carrier that China has,” said Sheu from INDSR.

“CATOBAR carriers have much better capabilities, but they still need to have enough operating experience,” he added.

The CSIS report last November also said that after launch, it would still be years before the Type 003 is commissioned into the PLA Navy and achieves initial operating capability.

China already has the biggest naval fleet in the world, according to the US Office of Naval Intelligence. But the U.S. has far more aircraft carriers: 11 compared to China’s two.

Vulnerable as the ‘Moskova’

Taiwan’s Ministry of National Defense, which is watching China’s military developments closely, said in a report published earlier this year that the Type 003 would enable the PLA Navy to project power past the “first island chain.”

The first island chain, conceptualized during the Cold War, commonly refers to the major archipelagos that lie off the East Asian mainland coast. The chain stretches from the Kamchatka Peninsula in the northeast to the Malay Peninsula in the southwest, and includes the territory of U.S. allies Taiwan and the Philippines.

Taiwanese observers also pay attention to the PLA’s plan to procure new warplanes for the Type 003.

“The first two (aircraft carriers) have only J-15 fighters and maybe some helicopters but the third one may have some airborne early warning and control (AEW&C) KJ-600 aircraft,” military analyst Sheu said.

The Xian KJ-600 is said to accurately detect and track other airplanes and so greatly increases the effectiveness of carrier-based combat aircraft.

Meanwhile, Taiwanese media have been looking at the sinking of Russia’s flagship “Moskva,” reportedly by Ukrainian Neptune missiles, last week. Russia said it was damaged in an unexplained fire.

The missile cruiser Moskva was built in the same Black Sea Shipyard Mykolaiv in Ukraine as China’s first aircraft carrier back in the Soviet days. Beijing bought the ship, then called Varyag, and renamed it to Liaoning.

The Liaoning regularly patrols the Taiwan Strait and may be deployed in the event of armed conflict with the self-governing island. China considers Taiwan a breakaway province that shall be united with the mainland.

Taiwanese newspaper Liberty Times quoted an analyst as saying that “Taiwan has a bigger and more powerful anti-ship missile arsenal than Ukraine.”

The Chinese aircraft carriers could be “as vulnerable as the ‘Moskva’ to Taiwan’s anti-ship missile,” it said.