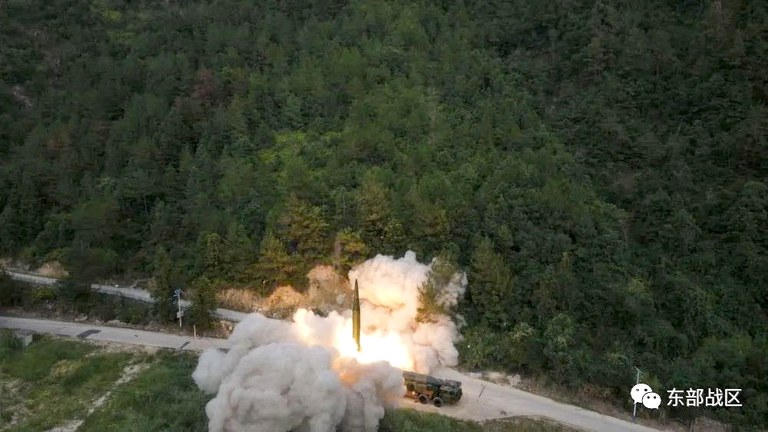 China’s People’s Liberation Army (PLA) appeared to have ended live-fire missile tests around Taiwan after just a few hours, amid international criticism and disappointment on domestic social media on Friday.

The missile tests were part of an intensive round of PLA military exercises around Taiwan scheduled from Aug. 4-7, and their conclusion was viewed by online Little Pink nationalist commentators as disappointing. The drills and incursions by Chinese ships and planes into Taiwan’s waters are continuing, however.

“Does this mean they won’t fire any more over the next couple of days?” wrote @Fengyun_is_back, while others quipped that the army is done “frying fish,” a slang reference to saber-rattling directed at Taiwan.

“Did they only have so many missiles, and did they fire them all at once?” one user commented.

Current affairs commentator Zhao Qing said he was surprised that the PLA had announced an end to missile tests, in a move that appeared hasty.

“It lasted just two hours and 22 minutes from the launch of the PLA’s first missile,” Zhao said. “I was really surprised by how short that was. I thought the live-fire missile launches would go on for 10 hours or more.”

“That was really unexpected. Five more missiles missed [their targets] and landed in Japanese waters, and they stopped the exercise after Japan protested,” Zhao said.

Japanese Prime Minister Fumio Kishida on Friday condemned the missile launches, calling it “a serious issue that affects our national security and the safety of our citizens.”

“China’s actions … have had a serious impact on the peace and stability of our region and the international community,” he told reporters after having breakfast with U.S. House Speaker Nancy Pelosi.

“I told her that we have called on [China] to immediately cancel the military exercises.”

Chinese foreign ministry spokeswoman Hua Chunying responded that China and Japan have never formally delimited the maritime area in question, so the missiles couldn’t be said to have landed in Japanese waters.

Meanwhile, blockades have apparently been lifted in at least three of the six maritime areas used for military exercises, Zhao said.

“Only the Chinese coastal waters to the west of Taiwan remain blocked,” he said, citing a shipping tracker. “The eastern side of the island is open to shipping, with military exercises completed on that side.”

“The shipping tracker website shows no information about any military warnings, and the ships are sailing there as normal,” Zhao said.

A current affairs commentator surnamed Li said the abrupt end to the missile firings suggested something had gone wrong.

“Their exercise plan was likely made a long time beforehand,” Li said. “The exercise was announced as three days in length, but it only took three hours.”

“There must be external factors in play [possibly because] the exercise was exposing them, because U.S. military intelligence collection capabilities are very strong,” he said.

“For example [they may now know about] their launch technology, performance and technical parameters of those missiles, meaning they would be making fools of themselves by firing them,” Li said.

Reports have also emerged of a personnel change on the first day of the military exercises around Taiwan.

A report on a government website in the eastern city of Ningbo said a local official had met with Wang Zhongcai, deputy commander and naval commander of the PLA’s Eastern Theater.

That post had previously been reported in the state-backed news site The Paper as being held by Mei Wen.

U.S. Secretary of State Antony Blinken told a news conference in Phnom Penh on Friday that China’s launch of missiles into Japan’s exclusive economic zone represented a “major escalation” of the situation.

He said the situation had led to a “vigorous communication” during East Asia Summit meetings in the Cambodian capital.

“[I said that] they should not use the visit as a pretext for war, escalation, for provocative actions, that there is no possible justification for what they’ve done,” Blinken said, adding that he had also called for an end to the military action in and around the Taiwan Strait.

A military scholar who gave only the surname Li said the five missiles that landed in Japanese waters had exposed weaknesses in the PLA’s missile launch technology.

“Their missile technology is relatively outdated, as it relies on a U.S.-made civilian GPS positioning technology for guidance,” Li said.

“The Dongfang-15 was … developed for use against the former Soviet Union, with very similar technology to that of the U.S. at the time,” he said. “[Their] more recently developed missiles could have been even more inaccurate.”

Yang Haiying, a professor at Shizuoka University in Japan, said the Japanese government has lodged a strong protest with China and canceled a planned meeting between the two countries’ foreign ministers.

“This year was supposed to see celebrations of the 50th anniversary of the normalization of relations between China and Japan, but those five missiles have made it impossible to celebrate,” Yang told RFA.

“There is no way of knowing now if the missiles’ targeting was intentional or not,” he said.