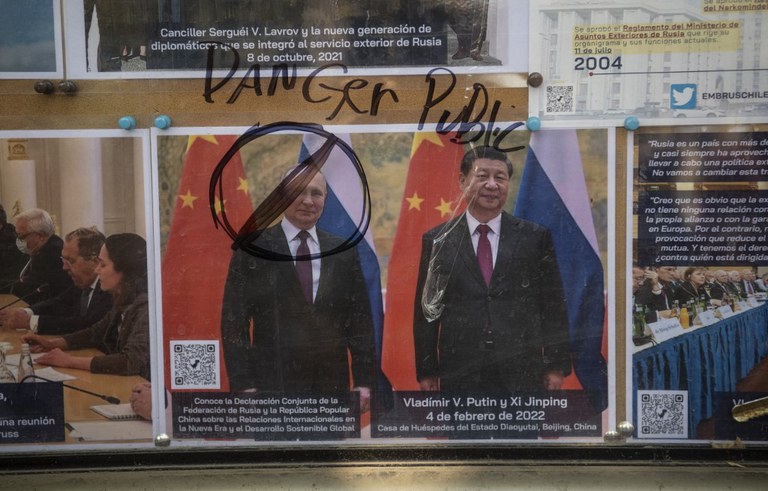 Chinese leader Xi Jinping is struggling to balance his country’s geopolitical interests with his support for Russia in the wake of president Vladimir Putin’s invasion of Ukraine, analysts said following a call between the two leaders.

China’s foreign ministry said Xi had told Putin that Beijing would work with Moscow on bilateral cooperation, but struck a cooler note on Ukraine.

“China is willing to work with Russia to continue supporting each other on their respective core interests concerning sovereignty and security, as well as on their major concerns,” it paraphrased Xi as saying.

“China is also willing to work with Russia to promote solidarity and cooperation among emerging market countries and developing nations, and push for the development of the international order and global governance towards a more just and reasonable direction,” Xi told Putin.

But he called for a “responsible” approach to the war in Ukraine.

“Xi emphasized that China has always independently assessed the situation on the basis of the historical context and the merits of the issue, and actively promoted world peace and the stability of the global economic order,” the foreign ministry statement said.

“All parties should push for a proper settlement of the Ukraine crisis in a responsible manner,” it quoted Xi as saying in a phone call marking his 69th birthday.

According to the Kremlin, the two leaders discussed “increasing economic cooperation, trade and military-technical ties between China and Russia.”

The Chinese statement made no mention of military or technical cooperation. There was also no mention of a trip by Putin to China, suggested by Xi during a phone call on March 4.

“[Beijing] is worried about U.S. sanctions, but covertly supporting Russia won’t satisfy Putin, so they need to talk to each other personally,” current affairs commentator Lu Nan told RFA. “Actually, what Xi Jinping does will be a long way from want Putin wants.”

China has refused to describe the Ukraine war as an invasion, nor to condemn Russia’s military action in Ukraine, blaming eastward expansion by NATO for stoking security tensions with Russia and calling for the issue to be resolved through negotiation.

Chinese has repeatedly said there is “no upper limit” on bilateral cooperation, but vowed to play a “constructive role” to normalize the situation in Ukraine.

Liu Hsiao-hsiang, associate researcher at Taiwan’s Institute for the National Defense and Security Research (INDSR), said the relationship between Beijing and Moscow remains a marriage of convenience.

“China and Russia have no choices right now,” Liu told RFA. “China knows very well that even if it supports the West and the United States on Ukraine, that won’t win it the goodwill of the U.S.”

“Russia is its natural support base … but when calculating how to support [Russia], they will always prioritize their own national interest,” he said.

The U.S. State Department said on Wednesday it sees China as a close Russian ally.

“China claims to be neutral, but its behavior makes clear that it is still investing in close ties to Russia,” a U.S. State Department spokesperson said in a statement shortly after Xi and Putin’s call, adding that Washington is monitoring Chinese activity closely.

“China is still standing by Russia. It is still echoing Russian propaganda around the world. It is still shielding Russia in international organizations,” the spokesperson said. “And it is still denying Russia’s atrocities in Ukraine by suggesting instead that they were staged.”

“Nations that side with Vladimir Putin will inevitably find themselves on the wrong side of history,” the statement said.

“It’s in the best interests of the United States for it to dampen China’s support for Russia with verbal threats and actions of appeasement,” Lu said.

“China won’t overtly challenge Washington, but it will carry on quietly buying grain and natural resources from Russia, so as to meet its own domestic needs and also appear to be supportive of Putin,” he said.

Liu said that when the two leaders last spoke in March, the war in Ukraine had barely begun, and both likely underestimated the strength of Ukrainian military resistance.

“How the geopolitical situation changes in future will be the decisive factor,” Liu said of the bilateral relationship. “The relationships between the major powers will shift along with the changes in the way the war is going.”

The call came as Xi issued a new directive setting out guidelines for the use of the Chinese military for “non-war operations.”

The full text of the outline has not yet been published.

Germany-based analyst Wu Wenxin said the move has parallels with Putin’s “special military operations” against Ukraine, and indicate that the ruling Chinese Communist Party (CCP) is trying to create a legal basis to invade the democratic island of Taiwan.

“There are two reasons for this. One is that Xi Jinping’s status is threatened [due to the zero-COVID policy], and he wants to stabilize support from the military … ahead of the 20th CCP National Congress [later this year],” Wu told RFA.

“The other is that Xi Jinping may want to invade Taiwan,” said. “But starting a war looks very negative, so he has come up with the phrase ‘non-war military operation’.”

Akio Yaita, Taipei bureau chief for Japan’s Sankei Shimbun and an expert on China, said the move is in keeping with Beijing’s insistence that the Taiwan Strait is part of China’s territorial waters.

“Everyone is still very worried about whether Xi Jinping will use this kind of ‘non-military action’ as justification when he launches military action against Taiwan,” Yaita told RFA.

“Recently he proposed that the Taiwan Strait is an inland sea, that is to say, if he restricts foreign ships from entering the Taiwan Strait, it also gives him a certain legal basis [for an invasion],” he said.

“These moves are likely part of his political performance ahead of the CCP 20th National Congress,” Yaita added.