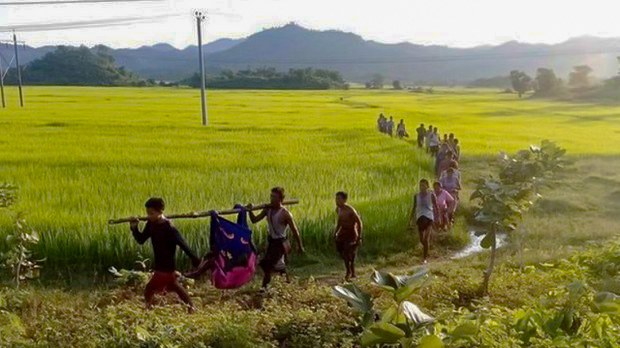 Artillery and landmine blasts have killed at least 51 civilians and severely injured 122 others, including more than 20 children, over the past two months in seven Myanmar states and regions where the military is fighting armed opposition groups, according to reporting by RFA Burmese.

The incidents occurred between Aug. 1 and Sept. 30 this year in Magway, Sagaing, and Bago regions, and Kayin, Kayah, Chin, and Rakhine states, RFA learned in a series of interviews with family members, rights groups, and anti-junta People’s Defense Force (PDF) paramilitaries.

Nine children were among those killed and a dozen others were left with severe injuries that included lost limbs from the blasts, which sources said were mostly the result of junta troops firing artillery into villages and landmines triggered near residential areas, farms, and camps for people displaced by violence.

RFA’s research found that the number of deaths and injuries from such incidents in the seven regions and states increased from 21 and 46 in August to 30 and 76 in September.

The toll does not include the number of deaths and injuries resulting from junta airstrikes, bombings, and gunfire from troops on the ground.

In one of the incidents documented by RFA, a seven-year-old child named Maung Gyi was killed on Sept. 25 when an artillery round hit his home in Na Ga Yar village, in Rakhine state’s Kyauktaw township.

The uncle of the boy, also known as Moung Ko Naing, told RFA that the shell was fired by junta troops from the 9th Military Operations Command (MOC-9) in Kyauktaw at around 11 p.m. that evening.

“The roof of the house was destroyed by the explosion,” he said.

“A shell fragment from the artillery blast hit Kyaw Maung’s son who was in the house. He was killed on the spot.”

The incident in Na Ga Yar came just four days after a shell fired by MOC-9 injured four members of a family in the same village, sources said, and amid increased clashes between junta troops and ethnic Arakan Army (AA) insurgents following a two-year lull.

The fighting in Rakhine has claimed the lives of eight civilians and injured 24 others over the past two months.

In compiling data for this report, RFA found that the highest number of casualties from artillery and landmines occurred in Kayah and Rakhine states, as well as Sagaing and Bago regions. The four states and regions accounted for 40 deaths and 95 injuries in August and September, or nearly 80 percent of the total number of casualties.

Banyar, the director of the Karenni Human Rights Group (KnHRG), told RFA he had seen a substantial increase in the number of casualties in Kayah state after junta troops changed from using more precise, defensive tactics to random, offensive ones.

“At first, the troops planted landmines in the vicinity of their camp, but now we see them planting several landmines wherever they go. They clearly intend to hurt civilians,” he said.

“For example, we have seen the landmines they planted on roads leading to homes, in residential compounds and near the stairs of houses.”

Banyar said the military also used to exclusively shell areas where there was ongoing fighting.

“These days, they don’t appear to have any specific target and fire at random,” he said.

“Sometimes, they fire shells to blanket an entire area. These shells fall and explode around civilians and cause severe casualties.”

RFA’s research found that PDF troops also regularly use artillery and landmines to target the military, although none of the incidents documented for this report were attributed to such attacks.

Myo Thura Ko Ko, the spokesperson of anti-junta Cobra Military Column, which engages with the military on a nearly daily basis in Kayin state, told RFA that his group is “careful when firing artillery to avoid civilian casualties.”

“We … fire artillery with accuracy and care,” he said, adding that Cobra fighters “only use the kind of mines that won’t harm the civilians.”

However, in May, the spokesman rejected claims that the military has targeted civilian areas with artillery. He said, at the time, that only PDF fighters plant landmines near villages and on roads, while the military only uses landmines to defend camp positions.

Min Zaw Oo, executive director of the Myanmar Institute for Peace and Security (MIPS), said the relevant authorities should take action against those who are responsible for civilian casualties, regardless of which side they are on.

“Whenever there are violations that cause harm to civilians, the relevant armed group should take effective action,” he said.

“It is necessary to have mechanisms for investigation and prosecution in place to respond to these kinds of violations. They will only continue if such mechanisms are weak.”

Research compiled by MIPS found that a total of 4,398 civilians died from artillery blasts, landmine explosions, death by torture, shootings and targeted killings, in the more than 20 months since the military seized power in a Feb. 1, 2021 coup.

RFA also contacted UNICEF and the United Nations refugee agency via email seeking comment on the situation of civilian casualties in Myanmar, but had yet to receive a response by the time of publishing.

London-based Amnesty International said in July that junta troops are committing war crimes through their indiscriminate use of landmines – mostly locally made M-14 and MM-2 landmines that have been banned by international treaties.