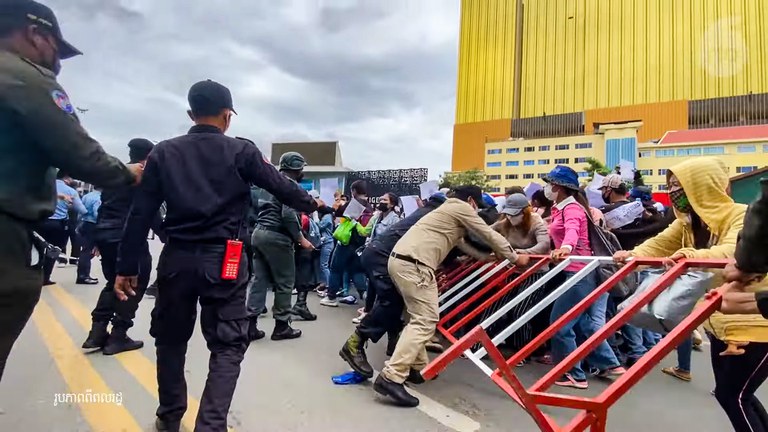 Authorities in Cambodia’s capital Phnom Penh violently clashed with some 100, mostly female former casino workers demanding to be reinstated to their jobs on Thursday, breaking the nose of one woman and leaving several others injured, according to sources.

The former workers are from a group that has been holding regular protests since they were among 1,300 laid off by the NagaWorld Casino in December 2021. The workers say they were unfairly fired and offered inadequate compensation, although only around 150 continue to protest, as an increasing number have accepted payouts after months of no salary and repeated confrontations with police.

At around 2 p.m. on Thursday, dozens of authorities blocked the group from holding a protest outside the casino with metal barricades, and rained blows down on those who tried to remove them, according to Bun Sina, one of the former workers.

“I came to demand the right to seek justice, [as the situation] has not yet been resolved, but I was kicked in the thigh by the authorities,” she told RFA Khmer, adding that she was shocked by the brutality of the officers.

“How much more of this violence and torture will we have to suffer from the authorities before this dispute is resolved?”

Another worker named Sun Sreynich told RFA she was punched in the face by a police officer during the scuffle, causing her to bleed from the nose and pass out.

“We were kneeling in front of the security forces and begging to be allowed to go to the NagaWorld building, but they assumed we were attacking them and fought us,” she said.

“The officer hit me full force with his fist, breaking my nose and making me bleed. The blow knocked me unconscious,” she added, saying she is still in pain from the injury.

The two sides clashed for around 15 minutes before resuming a verbal confrontation across the barricade line. The former workers eventually left the area around 5 p.m.

Following the incident, the Phnom Penh government issued a statement calling the rally “illegal” for disrupting traffic and accusing protesters of intentionally attacking the reputation of the authorities by orchestrating the clash.

“They created an event to put the blame on the government, inciting and provoking anger by cursing and insulting public officials before smashing 20 barricades and using violence against security forces who tried to block their path,” the statement said.

“All workers should stop their unlawful demonstrations and try to resolve the dispute with the authorities,” it added.

More than eight months since the layoffs, NagaWorld has said it will only discuss severance packages with former workers and Cambodia’s Ministry of Labor has deferred the matter to the courts. But the workers say they can’t afford to bring a lawsuit against the company and have urged the government to intervene in the dispute.

Earlier on Thursday, a group of around 50 former NagaWorld workers and trade union representatives gathered to submit a petition to the Ministry of Labor, requesting that authorities drop charges against Cambodian Alliance of Trade Unions President Yang Sophorn, who the ministry has accused of organizing the protests.

The petition also requested a meeting with Labor Minister Ith Samheng to find a resolution to the dispute.

NagaWorld Union President Chhim Sithaw met with Labor Ministry officials on Thursday and told RFA she was “disappointed” by their response, although she did not provide details of what was discussed.

“We only see that the government – through City Hall, the Ministry of Labor, the judiciary, the Ministry of Health, authorities at all levels – is standing by the NagaWorld company, which is prohibited by law,” she said.

“They have a role in mediation, not in protecting one side, and they must remain independent in this dispute.”