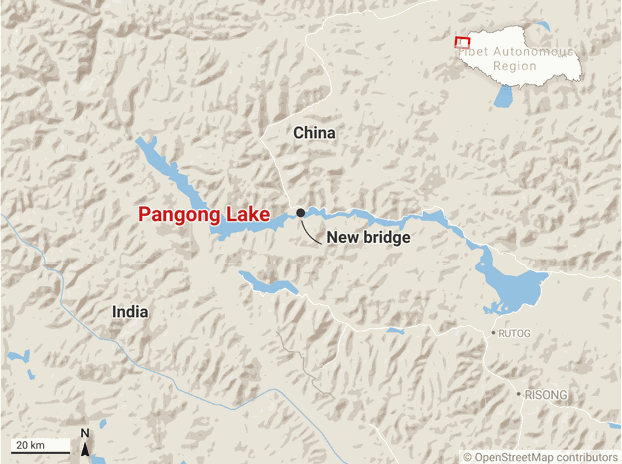 A bridge being built by China across Pangong Lake in a disputed section of northwest India could further inflame tensions between the two countries, experts on the border dispute said.

The bridge, which spans about 500 meters (1,640 feet), is situated south of a position occupied by China’s People’s Liberation Army (PLA) on the north bank of the lake in Ladakh, an area that India contends China has illegally occupied since 1962. The area has been the site of clashes between the countries, as has the so-called Line of Actual Control in eastern Ladakh that separates Indian-controlled territory from Chinese-controlled territory.

The bridge will cut the travel distance between the PLA position and a military base in Rutog (in Chinese, Ritu) county, Ngari prefecture, in far-western Tibet Autonomous Region by about 150 kilometers (93 miles), making it easier for Chinese troops to counter Indian forces if future flare-ups arise.

“China building bridge over Pangong Lake is a key area for the Indian border,” said Brahma Chellaney, a professor of strategic studies at the Centre for Policy Research in New Delhi. “Despite land agreements between the two, China has been carrying out military activities in the border area. The bridge will make it easier for Chinese troops to access the region.”

Sana Hashmi, a visiting fellow at the Taiwan-Asia Exchange Foundation in Taipei whose research focuses on China’s foreign policy and territorial disputes, said that the border dispute will be at the forefront of China-India relations going forward.

“This only shows that China has no real intention of resolving the dispute and that the tensions are only going to grow,” she told RFA in a written statement.

India is responding to the bridge construction by boosting its defense capabilities and seeking cooperation with like-minded countries, Sana Hashmi said.

Kunchok Tenzin, a councilor from the Pangong Lake area, said the bridge’s construction has raised concern among locals, who fear they could be hurt if a clash between India and China breaks out.

“The Indian government should make the development of border areas a priority and ensure the safety of the local residents,” he said.

Monk Kunchok Rigchok from Pangong Monastery said that people know the bridge may pose a threat in the future.

“Though there is no fear as we have lived here our whole lives, but the Indian government must remain on alert because China has illegally occupied land in the region,” he said. “They may target our place soon.”

Tenzin Lhundup, a Pangong Lake resident who lives by the border, said he was born in the area and intends to live there until he dies.

“We are not scared of the Chinese, as they have been visiting this area even during the pandemic lockdown,” he said.