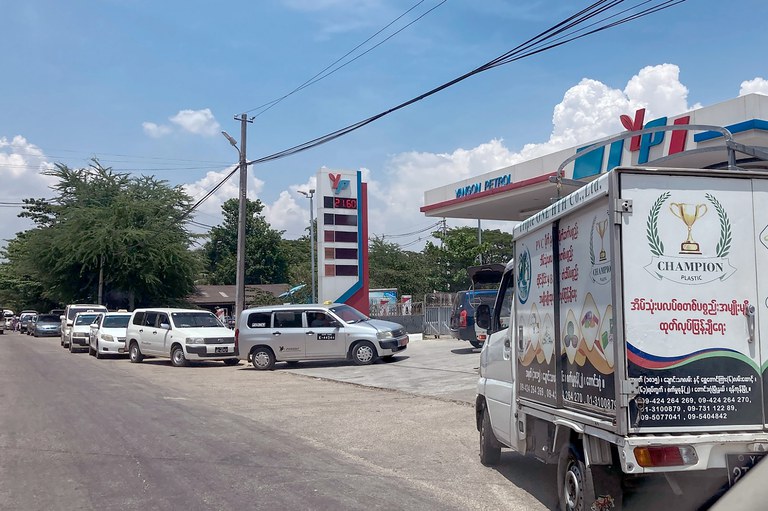 The Association of Southeast Asian Nations (ASEAN) ratcheted up its criticism of member state Myanmar’s junta on Wednesday, as Russia’s top diplomat visited Naypyidaw despite international outrage of the regime’s execution of four prominent democracy activists.

In a speech delivered at the opening ceremony of the 55th ASEAN Foreign Ministers’ Meeting in Phnom Penh on Wednesday, Cambodian Prime Minister Hun Sen, whose nation holds the rotating chair of the bloc, acknowledged that no progress has been made on Myanmar’s political crisis, despite junta chief Snr. Gen. Min Aung Hlaing’s pledge to end violence in April last year.

Hun Sen said that if the junta continues to execute its political opponents he would be forced to “reconsider ASEAN’s role” in mediating Myanmar’s conflict.

“The situation is now very volatile with the execution of the four opposition activists, and can be said to be worse than before the Five-Point Consensus (5PC),” he said, referring to the agreement Min Aung Hlaing made with ASEAN in April 2021 during an emergency meeting on the situation in Myanmar.

“ASEAN is deeply shocked and horrified by the execution of these opposition activists.”

ASEAN’s 5PC called for an end to violence, constructive dialogue among all parties, the mediation of such talks by a special ASEAN envoy, the provision of ASEAN-coordinated humanitarian assistance and a visit to Myanmar by an ASEAN delegation to meet with all parties.

Even Min Aung Hlaing acknowledged that the junta had failed to hold up its end of the bargain on the consensus in a televised speech on Monday in which he announced that the junta was extending by six months the state of emergency it declared following its Feb. 1, 2021 coup. He blamed the coronavirus pandemic and “political instability” for the failure and said he will implement “what we can” from the 5PC this year, provided it does not “jeopardize the country’s sovereignty.”

Frustration with the junta boiled over last week after it put to death veteran democracy activist Ko Jimmy and former opposition lawmaker Phyo Zeya Thaw, as well as activists Hla Myo Aung and Aung Thura Zaw, despite a direct appeal from Hun Sen to Min Aung Hlaing. The executions prompted protests in Myanmar and condemnation abroad, including from outspoken ASEAN member-state Malaysia, which said “no Myanmar military regime representative” should be allowed at any meeting of the bloc, including this week’s gathering of foreign ministers from ASEAN countries and nearly 40 ASEAN partner nations.

Wednesday’s comments sounded a different tune for Hun Sen who, on assuming the ASEAN chair earlier this year, predicted that he would use his skill as a negotiator to resolve the situation in Myanmar.

Hun Sen’s decision in January to become the first foreign leader to visit Myanmar following the coup was widely panned by the international community as conferring legitimacy on the junta and he has since remained relatively quiet while the crisis has worsened.

Speaking to RFA Khmer, observers said ASEAN stakeholders should not remain silent on the junta and suggested that the bloc call on the United Nations to intervene in Myanmar if it is unable to resolve the crisis on its own.

“For example, the ASEAN Chair should start talking to Myanmar’s [shadow] National Unity Government (NUG), not the military government,” he said.

Similarly, Soeung Senkaruna, spokesman for the Cambodian rights group Adhoc, said ASEAN should review its 5PC and, if unable to resolve the crisis, seek assistance from the U.N.

“There should be strong measures in place to punish the abuse and killing of innocent people,” he said.

“We think that with no such measures, Myanmar’s dictatorial leaders will continue to persecute their opponents in any way they see fit.”

Attempts by RFA to reach Cambodian Foreign Ministry spokesman Chum Sontory for comment on the situation in Myanmar went unanswered on Wednesday.

While many Western governments have sought to punish Myanmar’s junta for killing what rights groups say is at least 2,148 civilians over the past 18 months, Russia has continued to support the regime both diplomatically and militarily.

Details of the meetings remain unknown, but in a post on Twitter Russia’s foreign ministry cited Lavrov as saying that Moscow “appreciate[s] the traditionally friendly nature of our partnership, which is not affected by any opportunistic processes,” apparently in reference to efforts by the international community to sanction the junta.

The junta’s foreign ministry said Lavrov and Wunna Maung Lwin “cordially exchanged views on promotion of bilateral relations and cooperation and reaffirmed their commitment to enhance cooperation between the two countries in the multilateral arena based on mutual trust and understanding.”

Lavrov’s visit comes two weeks after Min Aung Hlaing traveled to Russia on an unofficial trip, which political analyst Ye Tun described as part of the junta’s bid to secure weapons from Moscow.

“The frequent back-and-forth visits between the leaders and the Russian foreign minister’s current visit all point to expanded economic ties between Russia and Myanmar and the effort to obtain military assistance – especially military equipment – from Russia,” he said.

Lavrov said in a press release on Tuesday that his trip sought not only to promote bilateral relations, but also strengthen economic cooperation and defense and security ties.

Amid the uptick in cooperation between Russia and Myanmar since the coup, the two countries’ relationship has become increasingly complex.

Myanmar-based political analyst Than Soe Naing said the junta is relying more than ever on Russia to uplift the country’s economy, which is in shambles due to Western sanctions.

“Myanmar’s economic situation is already in a serious state … as international oil companies, like Total, are withdrawing from the country,” he said.

“I believe that the junta is embracing Russia so that Russia can help the country in the face of an economic crisis – especially a fuel shortage.”

Thein Tun Oo, executive director of the Thaningha Strategic Studies Group, a think tank of former military officers, said the junta has become closer to Russia as a strategic partner in order to reduce its dependence on neighboring China for economic and military assistance.

“It may be a disadvantage to be dependent on a single country, so it’s not uncommon to find another strategic partner with whom you can have a really close relationship,” he said.

“It’s mainly for this reason that [Myanmar is] now looking at Russia as a strategic partner.”

Observers also suggested that junta leaders are more impressed with Russia than China when it comes to military technology.

Four months after last year’s coup, during his June 2021 visit to Russia, Min Aung Hlaing told Russian Defense Minister Sergei Shoigu that he was grateful to Moscow for making Myanmar’s army one of the strongest in the region. That same month, the U.N. General Assembly adopted a resolution to prevent the flow of military equipment to Myanmar, but Russia abstained.

Observers said Russia might see Myanmar as an important country if it hopes to expand its economic influence in East Asia.

The website Global Firepower, which tracks the development of military forces from around the world, said last month that Myanmar maintains a fleet of 280 aircraft, including fighter jets and attack helicopters, 664 tanks, and 155 warships, including one submarine.