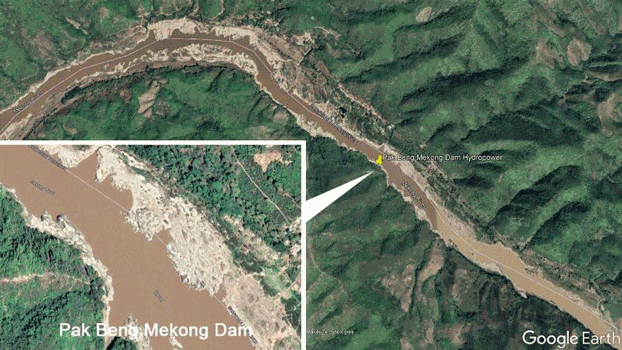 Chinese developers are preparing to begin work on two major hydropower dams to be built on the Mekong River in Laos, projects government officials hope will bring the impoverished country closer to its goal of become the battery of Southeast Asia.

But compensation and relocation packages for villagers affected by the massive infrastructure projects are still up in the air.

They will be the newest hydropower projects among dozens of dams that Lao has constructed on the Mekong and its tributaries under its plan to sell around 20,000 megawatts of electricity to neighboring countries by 2030.

In November 2021, Thai power authorities agreed to purchase power generated by the two dams, both located 60-80 km (35-50 miles) from the Thai border, and by the Nam Gneum 3 Dam on Nam River.

NGOs and local communities have warned that the Pak Beng and Pak Lay dams will harm the Mekong’s ecosystem and the livelihoods of people living along the river. The Pak Beng is expected to displace around 6,700 people living in 25 villages, and the Pak Lay Dam is expected to force the relocation of more than 1,000 residents from 20 villages, sources told RFA in earlier reports.

Though the Lao government sees power generation as a way to boost the country’s economy, the projects are controversial because of their environmental impact, displacement of villagers and questionable financial arrangements.

China Datang Overseas Investment, the developer of the Pak Beng Dam, has begun moving machinery to prepare the site and to set up workers’ camps in anticipation of a power purchase agreement (PPA) to be signed in May with Electricity Generating Authority of Thailand (EGAT), an official at the Lao Ministry of Energy and Mines told RFA on April 8.

“They have begun transporting machinery equipment in order to build [workers’] camps as they are looking for a buyer,” he said. “The main buyer is Thai, but the agreement has not yet been signed.”

Thailand is preparing a draft a memorandum of understanding on tariffs for power generated by the Pak Beng Dam and the impending Luang Prabang Dam before construction officially gets underway, said the official who declined to give his name because he is not authorized to speak with the media.

Most villagers fish the Mekong and grow rice and raise livestock along it. People who live near the Pak Beng project will lose their farmland and have to relocate to another area.

“Regarding the relocation of and compensation for affected villagers, the dam developer has not given details yet about how they will proceed,” a Pak Beng district official told RFA on April 8.

Villagers fear being shortchanged in the compensation they receive for their losses, as have other Laotians affected by hydropower dam projects.

“They’ve marked where the houses will be relocated, and now it is quiet,” said one affected villager who requested anonymity. “We are worried. The impact is huge.”

A resident of the district’s Homxay village said there is not much land available for farming in other parts of the district because most of it is in a mountainous area.

‘Nobody wants to relocate’

Meanwhile, China’s Sinohydro Corp. has begun to prepare for construction on the U.S. $2 billion Pak Lay Dam, an official at the Energy and Mines Department of Xayaburi province told RFA on April 1.

“They’ve started, but the relocation of the families has not,” he said. “As soon as the power purchase agreement is signed, they [Sinohydro] will bring all the equipment and materials to the dam site.”

The developer has been preparing to build an access road, a workers’ camp and a power source at the site since late 2021, said the official who declined to be identified because he is not authorized to speak to the media.

The preconstruction phase is moving ahead, but Lao and Sinohydro officials have not yet met with the residents, he said.

A resident of Phaliap village in Pak Lay district confirmed that neither Lao government officials nor company representatives have formally spoken with villagers.

“They haven’t talked to us yet,” he said. “Nobody wants to relocate, and nobody wants to lose their farms, rice fields and cassava plantations.”

A resident of the district’s Nongkhai village, who expects to be displaced by the dam, expressed similar concern over the unsettled issues.

“We’re worried about the relocation, resettlement and compensation,” he said, adding that he has heard that villagers will receive 30 million kip (U.S. $2,500) per hectare of land, which they believe is a low-ball figure.

“We’re hoping that what they pay us is closer to what our land is worth or comparable to the market value,” he said. “As for the relocation, we don’t know yet where we’re going to move to.”

‘Dam will worsen the impact’

The Love Chiang Khong Group, a Thai NGO, has said the dam will reduce the fish population and destroy the ecosystem of the Mekong in the area.

“The river’s water level is fluctuating right now because of Chinese dams and the Xayaburi Dam,” said a representative of the organization, who did not want to be named so he could speak freely.

The Thai-owned U.S. $4.5 billion Xayaburi Dam on the Mekong River mainstem in northern Laos began commercial operations in October 2019, despite warnings by environmentalist and human rights activists about serious ecological and human impacts.

“Certainly, the new dam will worsen the impact,” he said. “We’d like all parties to reconsider the Pak Lay Dam project to avoid the worst environment impact.”

The Pak Lay Dam will displace 993 families, or 4,800 individuals, who will lose 3,500 hectares of farmland, according to the project’s environmental and social impact assessment.

Construction on the dam is scheduled to begin this year and run until 2029. The electricity the hydropower project generates will be sold to Thailand.

Reported and translated by RFA’s Lao Service. Written in English by Roseanne Gerin.