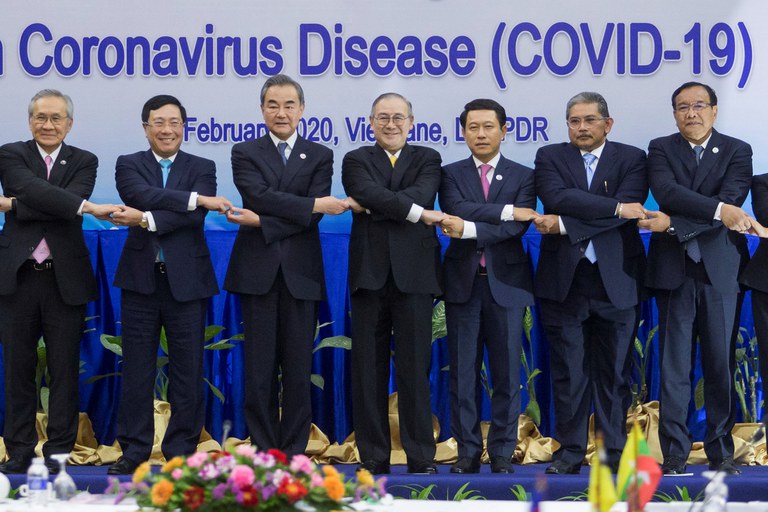 Four Southeast Asian foreign ministers are traveling to China this week while a U.S.-ASEAN summit that was due to take place in Washington appears to have been postponed indefinitely, prompting Chinese state media to carp that the region prefers to speak to China instead of the U.S.

China’s Foreign Ministry announced on Monday that the top diplomats of Indonesia, Thailand, the Philippines and Myanmar “will visit China respectively from March 31 to April 3” at the invitation of Foreign Minister Wang Yi.

At least some of the ministers would have accompanied their heads of state for the long-anticipated summit between leaders of the Association of Southeast Asian Nations (ASEAN) and President Joe Biden that had been planned for March 28-29. But that meeting ran into scheduling problems.

A senior Biden administration official conceded Monday that “much to our disappointment, we weren’t able to get this locked down” but they were very committed to rescheduling it.

“We believe the clock is ticking, and we want to try and get this done.  And we’re working very closely with ASEAN to try and come up with an appropriate time to do this,” said the official who was briefing reporters on condition of anonymity, under ground rules set by the administration.

Still, on Tuesday Biden had an Oval Office meeting with Singaporean Prime Minister Lee Hsien Loong, who urged closer U.S.-ASEAN ties and expressed appreciation for Biden’s commitment to the region. He said “it helps the U.S. to be present in the Asia-Pacific and to deepen its relations with many friends and to strengthen its strategic interests in the region.”

Biden vowed that the Ukraine crisis would not distract from the U.S. from implementing its Indo-Pacific strategy. He said he wanted to ensure that the region remains “free and open.”

In Beijing, China was making its own play to demonstrate its engagement with Southeast Asia.

He said the visit “again demonstrates the close and friendly relations between China and its ASEAN neighbors and the high importance all sides attach to advancing China-ASEAN cooperation.”

It is unclear whether foreign ministers from the remaining six ASEAN countries were invited.

The state-run newspaper Global Times said “to visit China while delaying the meeting with the U.S. shows ASEAN’s willingness to talk with China rather than the U.S.”

The paper, known for its nationalistic, anti-U.S. stance, quoted an expert, Qian Feng, as saying that while China “truly and sincerely helps them [ASEAN countries] boost economic development and solve practical problems through win-win cooperation, the latter [the U.S.] doesn’t really care about their current situations but just wants to use them to contain China without bringing them tangible benefit.”

“Obviously, ASEAN members know that,” said Qian, director of the research department at the National Strategy Institute at Tsinghua University.

Collin Koh, a research fellow at the S. Rajaratnam School of International Studies in Singapore, said the Chinese newspaper “is comparing apples and oranges, and making a mountain out of a molehill.”

The trips to Beijing is of a different level to the summit which would involve heads of state, Koh said.

“This can’t be compared to the foreign ministers going to China,” he said.

The scheduling of the ASEAN-U.S. summit ran into trouble when the facilitating country, Indonesia, couldn’t get all ASEAN members to agree on a date.

Prime Minister Hun Sen of Cambodia, the current chair of ASEAN, explained on March 17 that among the bloc’s 10 members, “four countries said they could not attend the meeting [on March 28-29] while some others were requesting that the summit be held on March 26-27 – dates the U.S. said it could not make.”

“Half the ASEAN leaders were not happy with the U.S. because they had proposed several dates for the Biden team to consider but the U.S. side kept changing the schedule,” he said.

And with the crisis in Ukraine, “in some ASEAN capitals there is a prevailing fear that the Russia-Ukraine quagmire could hijack the summit,” Kavi said.

According to a Vietnamese analyst, there has also been a certain unease among some ASEAN countries that they would be pressured to take sides in the Ukraine war. The analyst requested anonymity to discuss a matter of diplomatic sensitivity.

Vietnam, together with fellow ASEAN members Brunei and Laos, abstained on March 24 from a U.N. resolution on humanitarian consequences of the Russian aggression against Ukraine.

Hanoi also abstained on an earlier resolution on March 2 that condemned Russia’s aggression and demanded that Moscow immediately end its military operations in Ukraine.