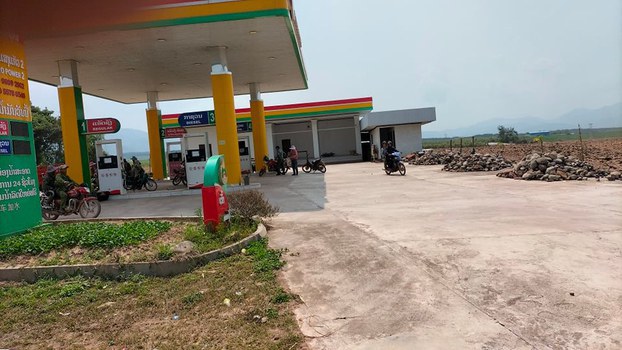 Gas stations are closing across Laos as shortages in the Southeast Asian nation enter their sixth month and citizens clamor for government action, sources in the country say.

Filling stations began to post signs reading “No gas” or “Temporarily closed” around Nov. 1, 2021, with some motorists staying home, unwilling to drive their motorcycles or cars for fear of running out of fuel on the road.

“There has been no gas here since Sunday and my car’s gas tank was empty, so I have had to buy gas sold in bottles on the street,” one motorist in the town of Luang Namtha in Luang Namtha province in northern Laos told RFA on Tuesday.

“I need it to go to work in Viengphouka district, which is also here in the province but is much farther away, and there is no gas in that district either,” RFA’s source said, speaking on condition of anonymity for security reasons.

The entire province now has only one gas pump open, and long lines have formed there of people waiting to buy gas, he said. “The government should tackle this gas shortage as soon as possible, because many government employees are not going to work now because there is no gas.”

A source in Viengphouka said however that though most filling stations in the district have recently closed, a Petroleum of Thailand (PTT) station remains open, and one or two other stations may open again soon.

“This morning, I got three liters of gas at the PTT gas station, but gas is rationed there, and each driver is allowed to purchase only three liters at a time,” he said.

The owner of a now-shuttered filling station in Luang Namtha town said his own pumps have now run out of gas, with the company that supplies him saying they have none left to sell. “We’re not hoarding gas, though. We would sell it to the public if we had it,” he added.

“Yes, we’ve run out of gas, and I’ve shut down my pump,” echoed another station owner in the province. “But we can’t buy gas from anywhere else as it’s too expensive and would cost us more to buy than the price for which we could sell it.”

Can’t keep up with costs

Speaking to RFA and declining to be named, an official in Luang Namtha province’s Industry and Commerce Department said that the privately owned fuel company importing gas to the province from neighboring Thailand can’t keep up with rising costs.

“The exchange rate between the Lao kip and the Thai baht is much too high,” the official said. “We’re inspecting all gas stations that we suspect of hoarding gas. And if a station is hoarding, it will be fined. We’ll be importing more gas soon,” he added.

In other Lao provinces such as Borikhamxay, Champassak, and Attapeu, and in the capital Vientiane, shortages have grown worse since early March, and many gas stations remain closed, sources said.

“Now, gas prices are going to jump again, and then the cost of everything from fish sauce to beef to toothpaste will go up too,” a government worker in Vientiane told RFA on Monday.

“But our salary is still the same, only two million kip [$170] a month. This is not enough to live on, so I have to sell makeup online to make ends meet,” she said.

A hotel receptionist in Vang Vieng, a popular tourist destination in Vientiane province, said he had paid 170,000 kip [$14.47] in December to put gas in his motorcycle. “But now I pay double that amount, and I also have to pay for rent and food. I can’t keep up with it. I can’t work anymore,” he said.

“My salary is two million kip per month, but now I pay half of that just for gas to come to work,” added a school teacher in Borikhamxay’s Pakkading district. “Sometimes I am waiting in long lines early in the morning to get gas, and I come to the classroom late,” she said.

Speaking recently to RFA, a Lao trade official said that the Lao government is doing everything it can to lower gas prices, “including lowering the value-added tax on gas from 10% to 7%.” However, in a March 18 statement, Lao Minister of Industry and Commerce Sompheng said that gas prices themselves would continue to climb.

According to the Lao Ministry of Industry and Commerce website, Laos imports 81% of its gas from Thailand, 18% from Vietnam, and one percent from China.