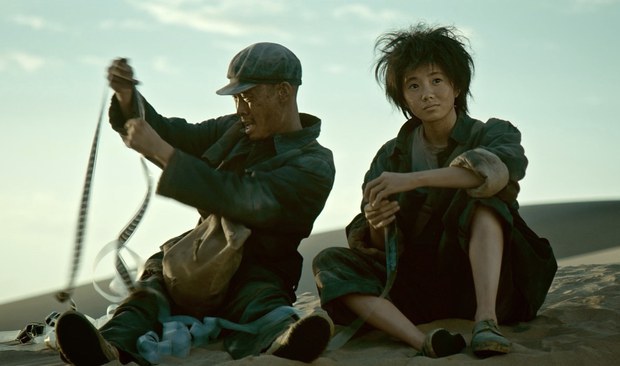 Any reference to Chinese-American author Geling Yan has been removed from a 2020 film released in China, despite it being an adaptation of part of one of her novels, her husband and agent Lawrence Walker told RFA.

The removal of her name comes after she made an outspoken social media post after a trafficked woman from rural China was found chained by the neck in an outhouse belonging to her “husband” after giving birth to eight children.

“Ever since I heard about this mother in chains, I’ve been angry, sad, restless, and in a trance all day…I realized that maybe it’s time to set aside time for anger, just to let it happen. Anger makes poets, and anger fuels many of my novels,” Yan wrote on the Survivors’ Poetry account on the social media platform WeChat.

“You ask: why are you angry? I answer: Because you are not.”

The saga began with Chinese director Zhang Yimou and Yan signing an agreement in 2011 giving Zhang the movie rights to her novel “The Criminal Lu Yanshi,” which tells the tale of a man sentenced to labor camp for the political crime of being a “rightist.”

Zhang then made a movie based on the book called “Coming Home.” However, he also completed a second movie based on the novel titled “One Second,” but deleted any reference to Yan or her work of fiction from the publicity materials.

“Geling signed a contract with Zhang Yimou in 2011 because he wanted to make a movie adaptation of her book. He did make a film called ‘Coming Home,’ which was based entirely on the last part of the novel,” Walker said.

“Then Zhang Yimou kept thinking about a second movie he could make from another storyline in the book about a prisoner who escapes from labor camp to watch a one-second-long appearance by his daughter in a movie,” he said.

“Zhang Yimou had always felt drawn to this story, so he used it as the basic framework for the movie ‘One Second’,” Walker said. “We never expected that he would adapt this novel into two movies, although the terms of the contract didn’t prevent it.”

“Geling gradually started collaborating with him on it [for that reason].”

Zhang invited Yan to Beijing for screenings of the unfinished film on two occasions, and there was a dispute about Yan’s credit on the movie, and Zhang had seemed keen to cooperate with Yan’s wishes, Walker said.

“But then there was a disagreement between them, because the movie rights to The Criminal Lu Yan had originally been transferred to two production companies, but he didn’t want to talk about getting them back from them; he wanted to go about it in an indirect way,” he said.

“At the time, they offered Geling four options, none of which mentioned ‘The Criminal Lu Yanshi’,” Walker said. “But they did thank Yan Geling; the wording was ‘inspired by Ms. Geling Yan, who has our greatest thanks’.”

In February 2019, the crew of ‘One Second’ traveled to Berlin for the Berlin International Film Festival. They met at Yan’s house, looking forward to seeing it presented in competition for a Golden Bear award, and entered the venue on the red carpet together with her.

But the movie was withdrawn abruptly just one hour before its scheduled media screening, allegedly for “technical reasons.”

Further delays ensued before the film was eventually released in November 2020 after Zhang made a number of edits and deletions to satisfy Chinese officials.

When the film finally did appear, there was no mention of Yan.

Walker said he has requested that Zhang and the production company restore Yan’s credit, as well as contacting the Hollywood Screenwriters’ Guild, of which Yan is a member, French film distribution company Wild Bunch of Paris, online platform Mubi, the Toronto Film Festival and the San Sebastian International Film Festival in Spain.

He asked them to consider whether they wanted to show films that didn’t respect the right of authors on their platforms. Mubi has since reinstated a reference to Yan as the author of the novel that inspired “One Second.”

But Walker said he had stopped short of taking legal action in China.

“We did also discuss whether to pursue a lawsuit in China, but the judiciary … are all of a piece with the government, so complaining about things in China meaningless,” Walker said. “We started thinking that maybe we could stop this sort of thing happening abroad instead.”

“They can do this in China, because they have all the power, but overseas, authors have copyright, intellectual property rights and moral rights,” he said.

Zhao Yijun of the Huanxi Media Group, which invested in “One Second,” told the couple that Yan’s name was definitely removed for political reasons, on orders from the State Administration for Radio, Film and Television (SARFT), and that Huanxi was obliged to implement that order.

Zhao also tried to threaten Yan if she tried to speak out about the move overseas.

“He said it was the SARFT that insisted on removing her name,” Walker said. “He said that Yan is up against an entire country, one individual, which immediately made [him] think about the Tiananmen Tank Man, meaning that the power of the state is many times greater than that of any individual.”

Walker said Yan’s outspoken criticism of official cover-ups in the early days of the COVID-19 pandemic in Wuhan had also made her persona non grata in Beijing.

Yan also referred to CCP leader Xi Jinping as “also a human trafficker” in connection with the Jiangsu chained woman incident, not realizing that the conversation she was having was being streamed live online.

The CCP’s ban has likely brought heavy economic losses for Yan, too.

Sweden-based translator Wan Zhi said Zhang Yimou, once lauded as a member of the cutting-edge fifth generation of Chinese directors, has long since sold out to Beijing.

“Zhang Yimou is basically the pet director of the hollow men … he has no personality or rights of his own,” Wan said. “He’s like a puppet.”

Repeated calls to Zhao Yijun’s cell phone were answered but the line immediately cut off this week.